The Inaugural Note! Unless You're Reading This On Our Webpage, In Which Case It's Not, But Never Mind

So once upon a time, there were two people named Charlie and Adam. They were friends, and then one day Adam decided to tell this story from a 1st-person perspective like a normal person and not some sub-fairy-tale style BS.

There, I feel better now.

So, I can't help but notice that we're vaguely something like 19 episodes in (I say "vaguely" because there's also an Episode 0 that no one should listen to plus like 17 Episode 10s and for the longest time there was no Episode 9 but now there is and so who can even keep track anymore? Well, unless you want to sit down and actually counting them, but if I can't be bothered then why should you?) and we've never really made it clear what we do or why we do it. Well, except for subtle hints and sideways comments about how we're about nothing in particular, but besides from being a rip-off of "Seinfeld" it's also not a terribly informative thing. Which, if we truly are about nothing, will not be improved by this, but on the off-chance that we may actually be about something, just something unfocused, I figured this was worth a shot.

So Charlie and I go back to high school, but as that has little to do with the podcast (beyond the friendship thing), I won't talk about that now. I just figured, y'know, context? Or something? As far as the actual podcast goes, the origins probably lay in conversation we would have on AIM.

(Does this even exist anymore, by the way? Or is everyone on Facebook chat now? The problem I always have with Facebook chat is that I'm a compulsive browser window/tab closer, and so the minute I'm done with something that tab is gone - which is kind of a problem if I was in the middle of a conversation on Facebook. I then have to log back in and make up some reason as to why I suddenly disappeared, because "Oh I forgot I was talking to you and so I closed Firefox" never seems to cut it with people.)

But anyway, we would have long rambling conversations on AIM, most of them frightfully witty and erudite, which we would then post on a forum that is now defunct so there's no way of proving me wrong now, is there? Sometimes we would be in the same room ('cos, y'know, roommates) but still talking on AIM, because Instant Messenger gave us an extra few seconds of brain time to avoid getting halfway through a sentence before fixating on bacon and losing track of the conversation. 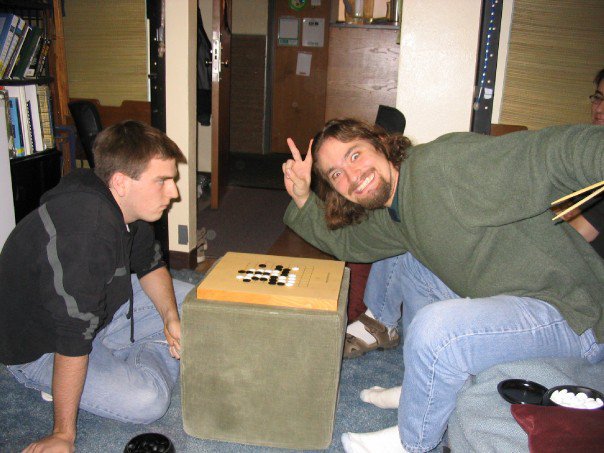 But one day in college, we were bored and had a couple people in our room, so Charlie and I decided, for some strange reason, to go onto the Forum and read some of the conversations aloud for the benefit of the others in the room. Despite what you might think, they did not flee the room in boredom/terror/disgust (delete where appropriate) but seemed to find it amusing. Even the story about the woman who has sex with an octopus and all the puns one could imagine would be involved in such a story. (It wasn't our finest story by any means, but it IS the one that we re-did for a podcast, so you can go listen if you really want.) Someone (probably Jon) dubbed it "Best of IM Theater". Or "Theatre", if you prefer.

So that's element one. Element two was when I discovered that Charlie's camera could also take crude video. That was the discovery that led to us making a few short films and one kinda long film, but that's a story for another post. Suffice to say, it kept the creativeness going.

Element three is the part that I kind of stole shamelessly from Charlie. See, Charlie is also, it turns out, somewhat talented at writing stuff, so at some point he had written excerpts from an action movie for his website. An action movie called "Nick Bronson: Dinosaur Hunter" which was actually quite entertaining.

The reason why we actually decided this is lost to time (unless Charlie knows), but for whatever reason we thought it would be a good idea to make a radio version of "Nick Bronson". Well, I suspect it was Charlie's idea, but I'll be damned if I'm going to let him get away with a good idea scot-free.

Whew, this is a long story. Hold on, let me find an evil photo of Charlie to give you a break with. 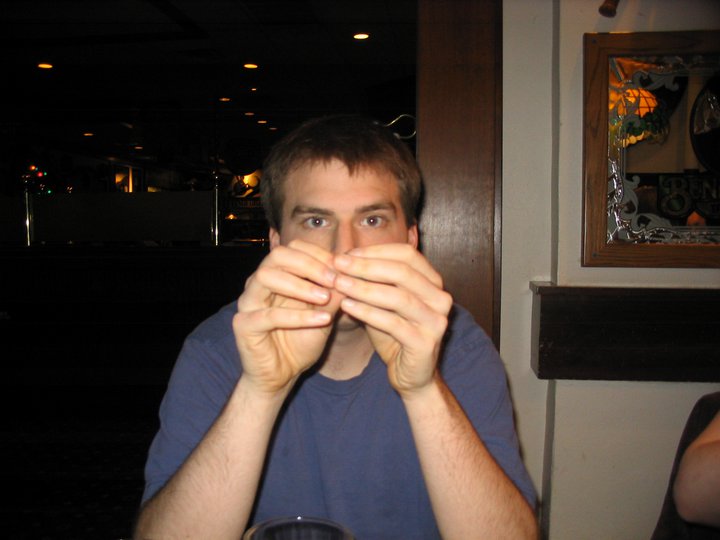 Just look at him, plotting something diabolical.

So radio show. Right. Because all our friends were gone and trying to get them all to be in a video anyway is like herding cats and it's way easier if we just do all the voices. So we made a Nick Bronson radio show that we were both very proud of and is unconscionably not on our webpage (Editor's Note, 11-27-10: It is now available in the Musings section of our website. Click here to listen to it now!).

Then Charlie said we should do a podcast, and so we did.

Wow, this isn't at all what I said it would be at the beginning, is it? 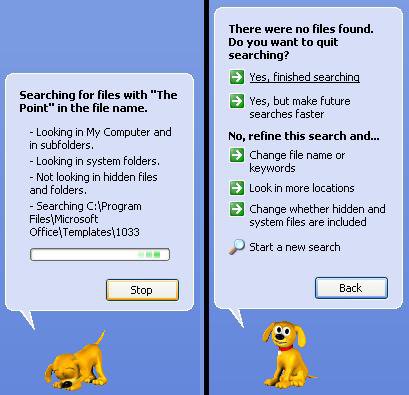 Maybe you should just give up now.

So I guess next time we can talk about what we're doing? Or not. It's your choice, really. Just let us know.