Best Buy Can Go to Hell!
and I would still go there for low, low prices

As you may or may not know, this summer I applied for a job at Best Buy. It made perfect sense. I shop so much there, why not get a nifty employee discount and browse their quality merchandise while I am supposed to be "working"? And at the end of the week, I still come home with extra money!

I filled out their application online, which asked profound questions such as:

I will steal from my employer if I want something bad enough
Strongly agree
Agree
Disagree
Strongly disagree
I like to start fires!


I guess I filled out the application so well that they called me back not 15 minutes after I completed it. Unfortunately, I was already gone, out on important business, probably fighting crime or feeding the less fortunate or something.

I called back the next day. After several attempts to patch me through to a manager, and ending up with the same customer service guy every time, I decided to take the arduous ten minute trek over to my local Best Buy. Upon arriving, I was very well received. Apparently my reputation had preceded me!

A sales girl was very eager to set up an appointment for an interview with the head of the media/software department. Several employees came and introduced themselves to me. In good humor, I told them that I had not yet been interviewed, but I appreciated their friendliness. It looked like my chances were good!

However, as the day of the interview approached I received an IM from my good friend Chad. Apparently, he had applied for the same position, and had an interview before mine! The bastard! He was going to steal something I so richly deserved. I drew up several plans for booby traps designed so that Chad would have an unfortunate "accident". But first, we would have to see the outcome of our interviews. Surely, the dedicated employees of Best Buy would see that I was infinitely more qualified than this Chad fellow, if that was indeed his real name... 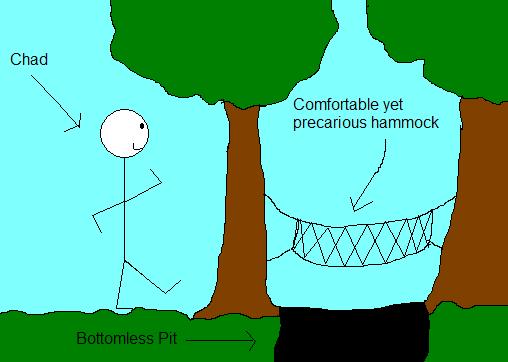 Wednesday morning, 11:30 am, 2 hours before my interview. A message is left on my answering machine.

"This message is for Charlie Wallace. Unfortunately, we have filled all our open job positions over the weekend, but we will keep your application and you will be the first to know if anything else opens up in blah blah blah..."

(Sounds of screaming and torture in background)"This message is for Charlie Wallace. Greetings, pitiful mortal! We have taken your application and used it to wipe our asses! We will now find various ways to use your social security number in unethical ways! Bwahahahaha! However, you will be the first to know if anything else opens up in blah blah fuck you blah..."

Here is my big question. They filled the open positions AFTER I had come in to set up an interview, but BEFORE my interview. If this isn't horrible ettiquette, I don't know what is. It's like signing up for a marathon, then reading in the newspaper that they decided to have it a day early and you already lost!

Well Best Buy, you can go to hell! I find your interview process to be subpar at best! I hate your stupid blue shirts and they make you look fat! You know what, I never really wanted to give a half-hearted hello to every single person who comes in the door, or ask the same customer 5 times if I could help him! You can take your precious job and shove it! I'll never shop at your store again!

Well, unless they have a good sale. Or there's a DVD I really want. Ooh, or if I need a new memory card for my digital camera . . .

Ah crap, I give up. Where are my keys? There's an extended version of Cannonball Run I've really been meaning to get.

Oh yeah, I guess one good thing did come out of this. Now Chad and I can be friends again. Just make sure to watch out for any conveniently placed hammocks, pal.